A Story of The Bear 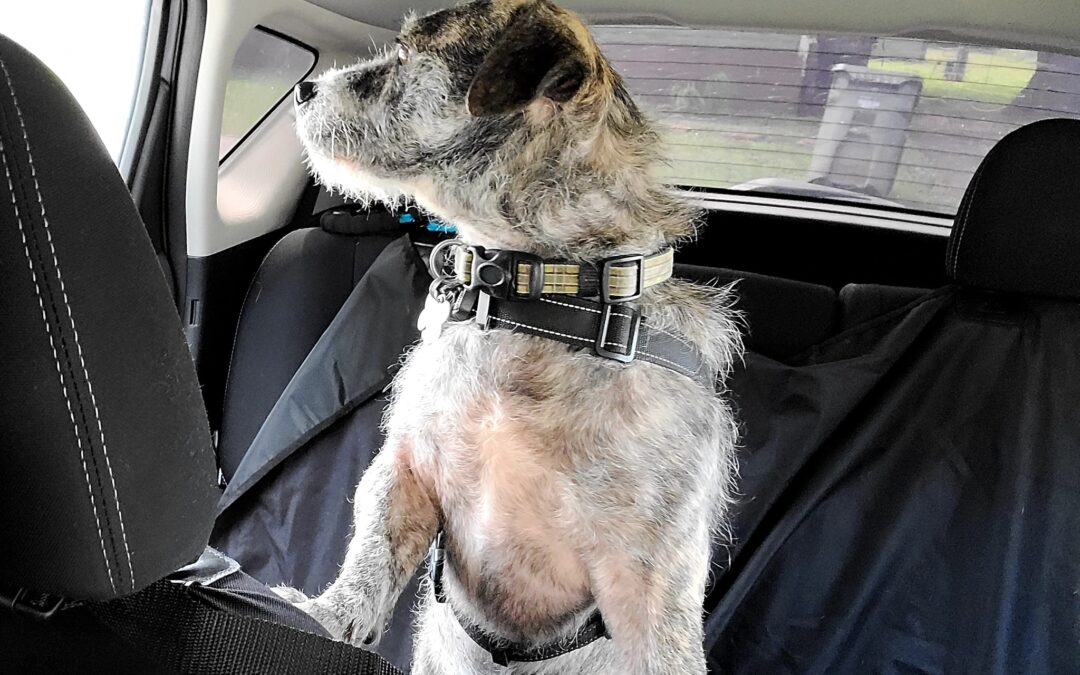 See this good boy here? That’s Bear. Also known as Bear Tank. He’s a complicated rescue mutt. Mutt… because he’s got every kind of hair and colors a dog could have. And too many kinds of DNA to narrow down. They call that Super Mutts.
Anyway…. I’ve had Bear going on two years now. A replacement for the hole left behind when I lost my Murphy.
Bear and I have had a complicated first year.
I knew from day one he would be a challenge. The shelter told me so. He was found as a stray. He had serious aggression issues to dogs… cats… a leaf. Didn’t matter. It set him off and he went berserk. He was the dog they said most deserved a chance. He’d been found on the streets. Wounded and not cared for. They think, judging by his scars and the way he behaves towards other dogs, he was used as a bait dog.
If you don’t know what that is–its a dog that’s thrown into a pit with fighting dogs to train them. The bait dog is LITERALLY thrown in there to be torn apart. It’s horrifying.
And Bear survived that. I believe, due to the injuries he was found with, he got loose during one of these training sessions.
That might help you understand why Bear is the way he is.
I will admit, he’s been the most challenging furbaby I’ve ever had. I’m sure the cats in the house would agree.
I will also admit that I contacted the shelter twice and told them I didn’t think I could do it. He was too much. He needed too much help. I wasn’t up to the task.
Everything Bear does is rough. He plays rough. He throws himself at you with joy when you get home. He lands all 25lbs of happy, rough dog on your belly to wake you up. Sometimes, he just lays on your face.
But Bear is Bear.
And I grew to love this misunderstood Super Mutt.
Fast forward to now.
Bear has become so much better. Yes, he still has issues. But he has such a huge heart that wants to be good. To be loved. And to not mess up. But sometimes, that reactive overload comes out. Especially when we go into public around other dogs. We didn’t get to do much of that last year. I got him December. Covid hit right after in February. He’s now going to doggy day care. He gets better each time. They know his history and they understand.
I’ve never had a reactive, aggressive dog. But in the past year, I got Belle. And that took a lot of work. But we got there. Then I moved the cats inside. That too, a lot of work. We got there. We even became a foster to a dog needing some place to heal. Albeit we kept that dog isolated behind a baby gate. But Bear got there with her too.
Today we went to get his nails done. My eyesight isn’t good enough to do it and I am very conscious that Bear’s trust is one that can break very easily. I’m sure at some point in his life he thought a human being kind to him would never hurt him. I’m also sure that human proved otherwise. But not me.
His usual groomer shut down due to Covid. I got a plan through Petco that includes nail trims. Now I know what some people’s thoughts are about big box pet stores and their grooming. This is not about that, so let’s not take it there. Thanks.
I’m always, always nervous to take Bear anywhere. He gets so worked up. Which means another dog we cross will also get worked up. I take all the precautions.
Secure harness –

Taken for a walk to get some energy out –

We get there and he’s nervous. I’m nervous. I wish so hard that he enjoyed these trips. I wonder if he thinks that he did something wrong. Is this where his human, who he’s tried his best to be a good boy for drops him off?
Is that dog that just came in the door, which barked at him and he barked back at going to attack him?
You can tell he’s a nervous wreck. He does this low whimper all while trying to protect me. Staying pressed right against my legs and watching everyone and everything. Pausing to growl if anyone gets too close.
Now, I want to make sure there’s no misunderstanding here. If someone comes up and I talk to them. And they talk to Bear, he will flop right over to show his belly. It’s the unknowns that put Bear in alert mode.
The groomer came out. Bear flopped over for a rub. I took off his leash and muzzle and off he went to get his nails trimmed and buffed.
I spent my time walking around the store. Determined NOT to be that kind of fur mom… hovering and watching. We learned last year if I’m in the room, he has a meltdown. If not, he does better. Just like a four old child would do when dropped off at daycare. I do steal peeks every now and then.
When we were done, she complimented him. Gave him lots of love. Said he did amazing and she’d groom him anytime. Of course he did… he knew she wasn’t there to hurt him. She treated him kindly and she wasn’t a threat.
We walked towards the register, going the long way due to a line and there was a young couple there. They had a big black Lab. I made a wide berth around them. They also weren’t wearing masks. I was. Texas is in a real hot zone for Covid right now.
“We’re vaccinated. No worries.”
Me – “Great. But I’m just trying to keep some distance with the dogs.”
Them – “Oh. He’s harmless. He’s sweet.” Their dog barking at Bear. Bear barking back. Pressed against my legs.
Me – “That’s fine. So is Bear. But still.”
Them – “Can we pet him?”
Me – now more than a little irritated. One – no masks. Two – my dog is wearing a muzzle for a reason. Three – they aren’t even TRYING to keep their dog back or leave us alone. “No. Sorry. Probably not the best.”
I walked away down the neighboring aisle and heard from that same couple, “People shouldn’t have dogs like that. If she can’t even let someone pet him, he needs to be put down.”
I froze. It took every bit of control NOT to go around the corner and throat punch them both. I squatted down and cuddled Bear. He actually did pretty good. He’s learned NOT to lunge at the other dog. He does still bark but now, only when they bark or lunge at him. He did AMAZING. But those people…
I told myself they were f’ing idiots and went a different way to the registers. I was two customers away when that same couple came up behind us. Their dog lunged. Bear pressed against me and barked as best as he could in his muzzle. The Lab keep trying. The couple kept telling everyone their dog was sweet. It just wanted to play… Putting every bit of the blame on Bear. And by association, me.
Luckily for me and Bear, one of the cashiers called me over to her register. She then stepped in front of the couple and told them due to THEIR dog’s behavior, they would have to wait rather than go to the second open register. She then knelt down, Bear flopped to his back and got love.
I adored how she took her time. So did Bear. He ate up the affection as he always does. Knowing she was making that couple wait. As she rang me up, she said quietly she’d heard what the couple said. She apologized. I told her it wasn’t her. But thank you. As I left, Bear did so good in not overreacting to any other dogs. Sure, people were wary – he’s in a muzzle after all.
He was rewarded with a Puppicino on the way home. And lots of love when we got there.
This was a story about The Bear.
Who is a very good boy.
Even if his mom wanted to let him eat two people’s faces.